Why I Left the Detroit Institute of Arts 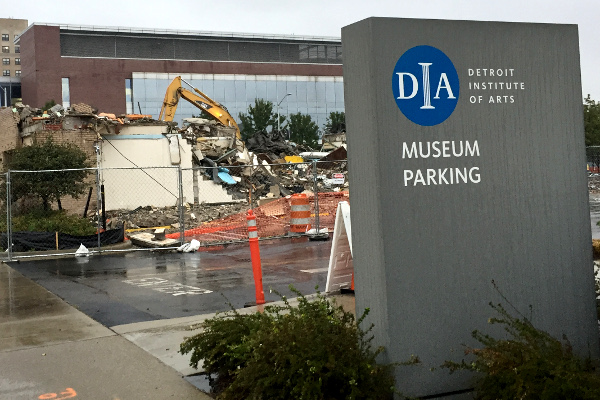 I began working at the Detroit Institute of Arts as a bookkeeper in April 2007. I had moved to the city two years before, but I was still working in Warren and excited to both live and work in Detroit. In 2011 I was promoted to Accounts Receivable Specialist. If you made a donation to the museum in the last six years, I was involved in processing that transaction in one way or another.

In October 2017, the DIA demolished the Barat House in order to expand its parking lot by 65 spaces. (I recently wrote a post about the history of the building and its architect. I recommend reading that first.) Although my job was just a minor clerical position, I have decided to leave the DIA in protest of the demolition and the manner in which the decision was made. Below are the four main reasons why I believe the DIA has made a terrible mistake.


#1. The Demolition Is Antithetical to the DIA's Mission

About a year before I started at the DIA, the following incident occurred. In February 2006, a twelve-year-old boy on a school field trip from Holly stuck a piece of chewing gum to Helen Frankenthaler's The Bay. Although the gum did not firmly adhere to the canvas, it did leave a quarter-sized stain. The painting was estimated to be worth $1.5 million. 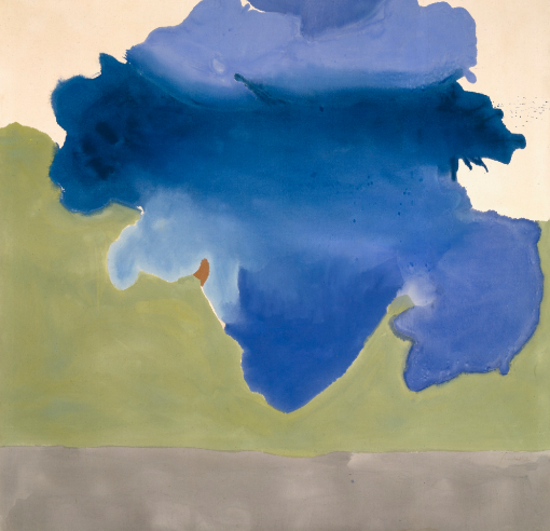 Detroit Institute of Arts
Helen Frankenthaler, The Bay (1963).
Conservators removed the painting from the Contemporary gallery and brought it to the museum's conservation laboratory. (Conservators are the only employees allowed to touch a work of art.) Museum staff contacted the chewing gum manufacturer to inquire about the gum's chemical composition. Conservators were able to identify an appropriate solvent that would remove the stain but not damage the paint. The stain was lifted one cotton swab at a time, and eventually The Bay was restored and put back on display.

What I love about the DIA is that works of art are not simply hung on a wall. They are cherished. An uninformed cynic might dismiss an abstract painting like The Bay, but the DIA invites visitors to experience each piece in a context respectful of the artist's intentions. The museum's collection is eclectic, and each work of art is appropriately displayed and respectfully interpreted.

I can't see a distinction between art and architecture. Buildings are sculptures, and cities are museums. I do not know why one kind of art should be handled with care and respect, while another is considered disposable, good only to be torn down and sent to a landfill. Maybe Frankenthaler's The Bay isn't as popular as a Van Gogh, and maybe architect Robert Harter Snyder's Barat House wasn't as widely appealing as a Frank Lloyd Wright. But I find beauty in all of them. 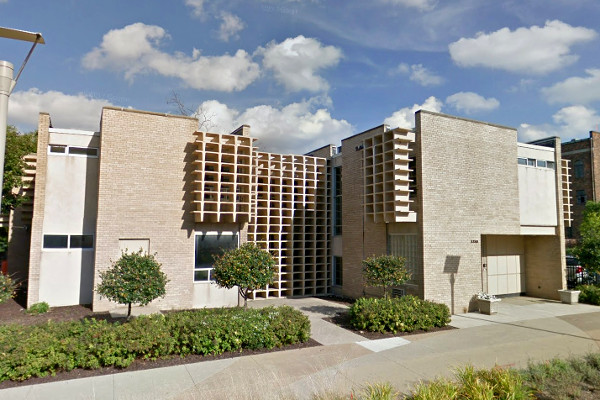 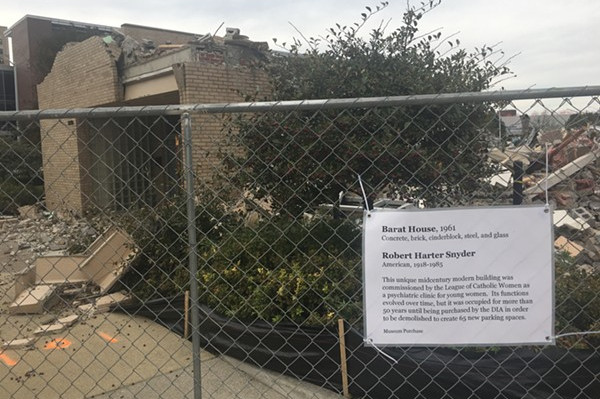 Detroit Metro Times
An oversized museum label was affixed to the fence
around the Barat House when demolition began.
The Barat House was part of Detroit's architectural heritage. I am disappointed that the leadership of an institution dedicated to preserving cultural artifacts went out of its way to purchase and demolish this building for a parking lot. 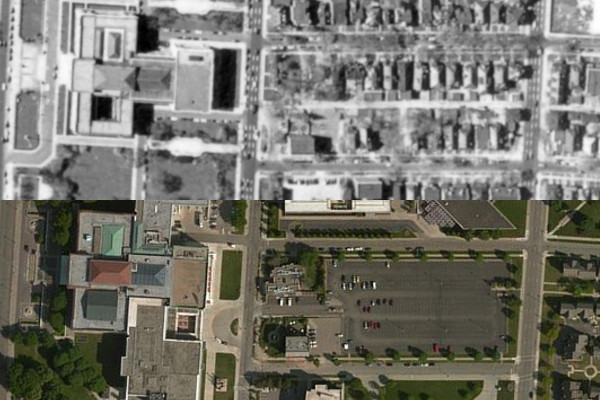 DTE | Bing Maps
The DIA and vicinity in 1949 vs. today.
No other factor contributes more to a city's beauty, liveliness, and functionality than the physical layout of its buildings, streets, and blocks. To spend time in a well-designed public space--be it in a big city neighborhood or a small town main street--is uniquely rewarding.

What specific features do great towns and cities share? First, they require density--not necessarily to the same degree as Manhattan, obviously, but closeness between people and amenities is the reason why cities exist. An unbroken continuity of buildings encloses a street and gives it a sense of place. Healthy neighborhoods contain buildings of a variety of uses--different types of businesses with different hours attract people throughout the day. Ideally, these buildings are of a mixture of ages, and include many old ones. Great cities also tend to be "fine grained"--i.e., it's better to have a large number of small buildings than a small number of large buildings. As one DetroitYES commenter said, "It's these little buildings, not the megaprojects, that make a city." 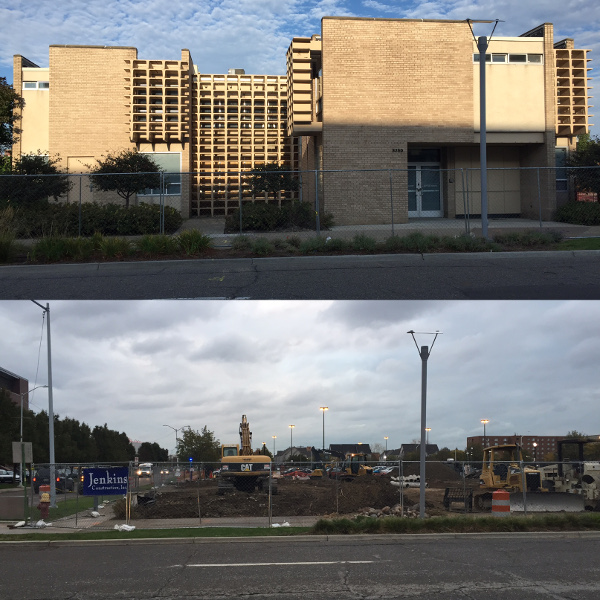 The streetscape on John R and Frederick before and after demolition.
The Barat House provided space for human activity in a city neighborhood with a growing population. It was a useful older building that allowed a nonprofit to operate in the area at a price it could afford. It sat on the Midtown Greenway Loop and provided a buffer between the DIA and its very large parking lot. Yes, it was only a single building--but with its demolition, the neighborhood is a little less dense, the local building stock is a little less diverse, and the streetscape far more barren. I believe this is a high price to pay for a handful of parking spaces.

Detroit has already lost an inconceivable amount of its urban fabric to parking lots, expressways, and suburban-style developments. It is good to accommodate visitors, but not at the expense of the neighborhood. The city just can't take any more abuse. 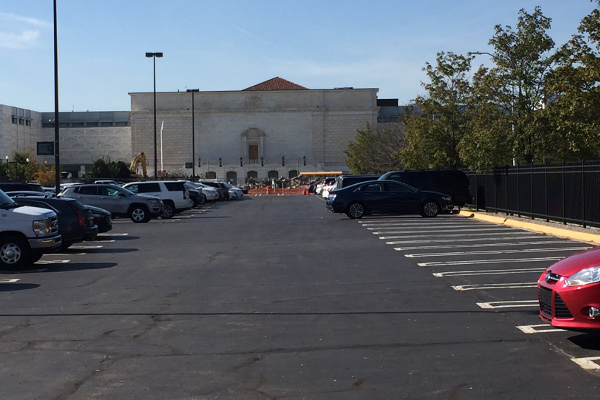 #3. This Will Not Improve Parking at the DIA

The reason why the DIA purchased and demolished the Barat House was because visitors reportedly complained about parking. Will the addition of sixty-five parking spaces satisfy them?

As urban planner Nate Hood once explained, "the perception of parking availability is different than the reality." Suburban living has primed us to expect free or cheap parking available at all times directly in front of our destinations. The briefest searches for parking and the shortest distances to walk from our cars result in disproportionate complaints. People even complain about parking in Farmington, my suburban community, although I have never had trouble parking in our downtown, ever, at all. 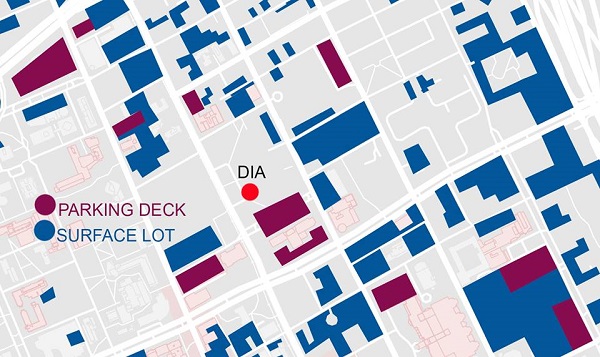 Public and private parking accommodations in the Cultural Center area.
Map by Mark Hall.
It's also important to understand induced demand, an economic principle that states that an increase in the supply of something can lead to increased demand and consumption. It's counterintuitive, but building more parking lots encourages more people to drive, which creates demand for even more parking. As urbanist blogger Angie Schmitt pointed out, there will never be "enough" parking.

A better way to improve parking at the DIA is to reduce the demand for parking. It's exciting to see new services already taking us in the right direction: the RefleX express bus service (soon to be superseded by new SMART bus routes), the QLine, and the MoGo bike sharing system can all accommodate museum visitors without requiring use of the Cultural Center Parking Lot. If autonomous vehicles become widely used, they are expected to reduce demand on parking as well. 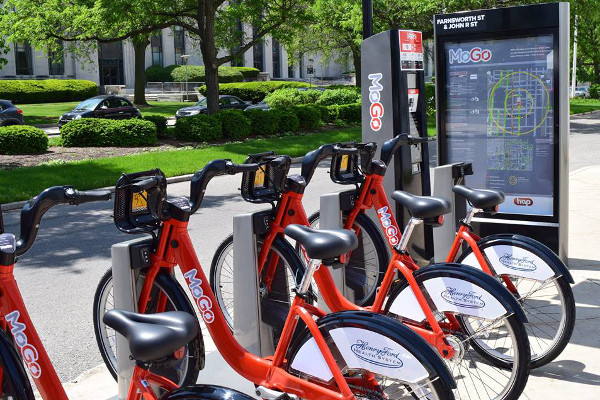 Facebook
MoGo, which hit its annual goal of 100,000 rides in less than five months,
has a station located just outside of the DIA's Farnsworth Street entrance.
Even simpler alternatives are available. The DIA could:
Being realistic about a growing, densifying downtown in a major American city means that more of us are going to have to get accustomed to using other forms of transit.


#4. DIA Leadership Has Acted Without Transparency

When I learned in September 2016 that the DIA had purchased and planned to demolish the Barat House, I hastily posted this information (along with some photos and a brief history of the building) on Ben Gravel's Historical Detroit Area Architecture Facebook group. As a result, I was summoned to the DIA's HR department and warned not to share "confidential" information ever again.

After that point, I anticipated some sort of announcement and public dialogue about the demolition. I prepared additional research on the building and waited, rather than initiate a discussion and risk further accusations from my employer. But by the time the demolition was formally announced, the timing could not have been worse. An internal email was sent out an hour after I left work on Thursday, September 21. The next day was my wedding day, and I was gone the rest of the following week for my honeymoon. By the time I returned to work on October 2, preparations for demolition were well underway, and workers began tearing down the facade that weekend.

There was no public announcement. There was no community dialogue. Local residents and DIA patrons were not given an opportunity to engage in a discussion about parking or the Barat House. Oddly enough, even the purchase price was omitted from the property transfer. It's not my intention to air my former employer's dirty laundry, but I do feel that the DIA leadership has become increasingly insulated, secretive, and disconnected. I believe that an institution dependent upon donors and taxpayers should operate with more transparency and less secrecy, especially given the impact the demolition will have on the public realm, and the considerable resources involved. 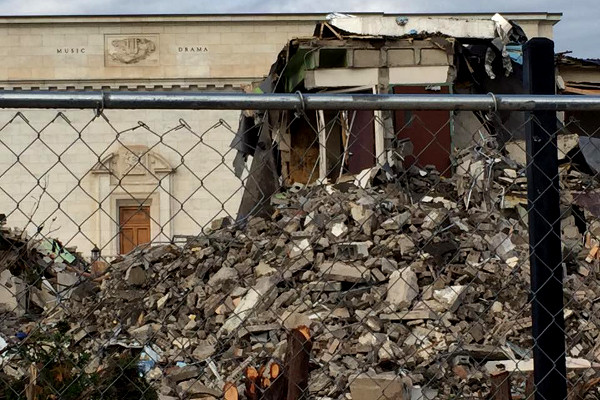 The DIA has said that other local institutions supported the conversion of the space into a parking lot, but these entities were left unnamed. There was, however, one organization mentioned by name--the museum said in a statement that it "met with the president of Preservation Detroit to let them know of our plans and gave them the opportunity to examine the building's exterior to determine if there were any materials they wanted to salvage." What the DIA left out was that Preservation Detroit emphatically opposed the demolition. "When we first learned that the DIA had purchased the building and that they were considering demolishing it, we immediately contacted their team to express our concerns," Preservation Detroit said in a statement. "Over the next year we had several meetings and conversations with DIA leadership and asked them to consider the longer-term potential of this building as opposed to the short-term gain of a handful of parking spots."

Perhaps I'm wrong on every point I've made here today. I'm not an architect or an urban planner, and no one individual has all the answers. But had there been a public dialogue, at least the facts could have been uncovered, new and better alternatives could have been suggested, and appearances of secrecy and mismanagement by the DIA could have been avoided.

Some options for addressing parking should not be considered. For example, the DIA could fund the repair of its shuttered 368-space underground parking garage by selling millions of dollars of art--or the museum could cut down the trees on its south lawn and take a bulldozer to Tony Smith's Gracehoper to make room for a parking lot. Of course these ideas are ludicrous. Trees, art, and the Woodward Avenue streetscape all have worth beyond their monetary value. So did the Barat House. If it is unethical to sell art to make more parking spaces, then it is unethical to destroy someone else's art for the same purpose.

The DIA is not a bad institution. It's a great organization, but one that has made a bad mistake. Please do still visit and support the museum. (Remember that tri-county residents get unlimited free general admission!) And when you come to the DIA, if you have any constructive suggestions for how to improve parking (or if you would like DIA leadership to know that you have never had trouble parking nearby), please feel free to find and fill out a comment card. These are read, and they are taken seriously. 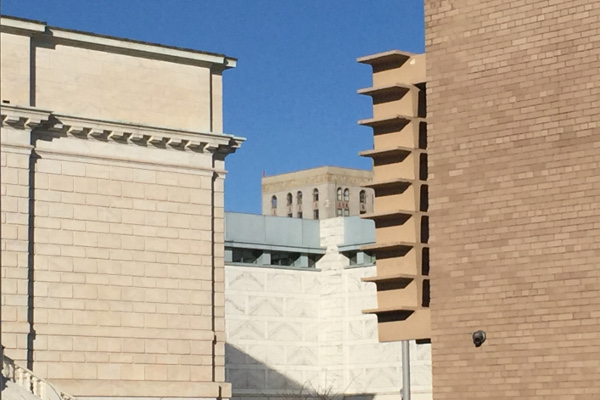 P.S. If you have any leads on jobs for a self-taught writer/researcher, yes I would like to know about them.
Email ThisBlogThis!Share to TwitterShare to FacebookShare to Pinterest

Be notified of future posts by email

Detroit Urbanism is about the ways our history has shaped the landscape in Metro Detroit, both city and suburbs. Articles tend to be deep dives into exactly how, when, and why our streets, municipal boundaries, place names, development patterns, and architecture came to be the way they are.
I welcome questions, criticism, and suggestions for future posts!